The RM of Hanover comprises an area slightly larger than the area set aside as a Mennonite reserve in 1873. This tract of land was referred to as the East Reserve. In 1880 the province organized the area as a municipality and named it Hespeler, after the man who brought the first settlers to the area in 1873. On May 25, 1881 the municipality of Hanover was established when the whole province was reorganized. At that time the east reserve was separated into two municipalities, Hespeler in the north and Hanover in the south. In 1890 the municipalities of Hespeler and Hanover were merged to create Hanover, as it is known today.

The area was settled by five different ethnic groups... Mennonites, Ukrainians, Germans, French and Anglo Saxon. In the early years over 50 communities were established but many did not last long. The communities of Steinbach, Niverville, Blumenort, Grunthal, and Kleefeld became the trading centres and they still exist today. Steinbach became the major trading centre for the region and it was established as a town in 1947. Niverville, the only other incorporated community within Hanover, was incorporated as a village in 1968.

Much of the land in Hanover was not ideally suited to grain farming. The area had course [coarse] textured soils, was largely wooded and had major drainage problems. While grain farming was possible some of these characteristics lead to the diversification of agriculture that the municipality displays today. Diversification into dairy, hogs, poultry, honey, potatoes and sugar beets has made Hanover a leader in the production of many of these products in Manitoba. Hanover has been highly productive in hogs since the 1940's but in the last twenty years the area began to specialize in hog production. This specialization created the need for agriculture related services like feed mills, hatcheries, transportation, farm implements and other agriculture services that make up the economic base of Hanover today.

**Excerpts from "Hanover: One Hundred Years" written by Lydia Penner. 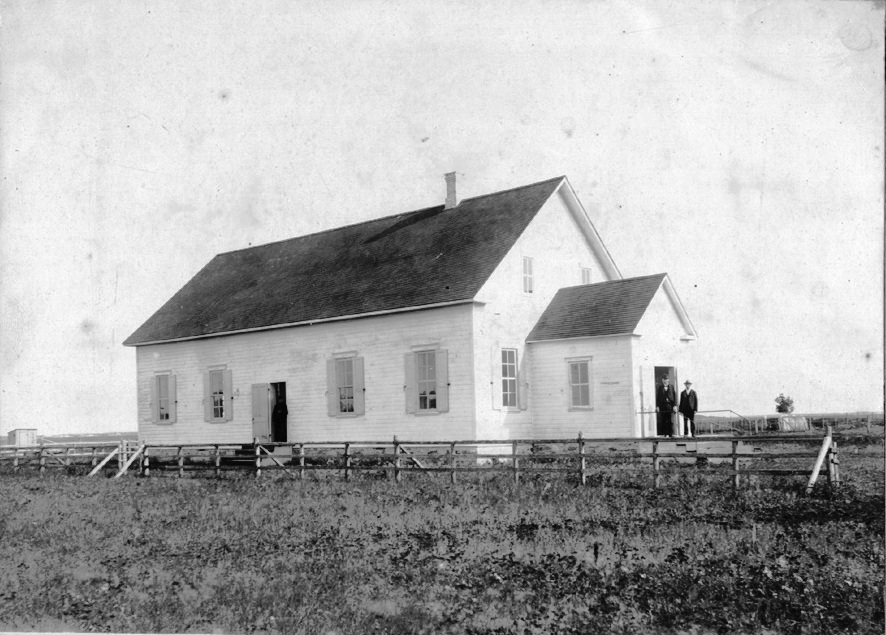 Chortitz, pronounced Gor'-tiets by Mennonites, is named after the first colony in "New Russia”, now Ukraine, settled in 1789 by Mennonites from Poland/Prussia. The name Chortitz is a western spelling of the name Khortytsa or Khortytsya as the island in the Dnieper River was called from ancient times, when it was used for hundreds of years by semi-nomadic peoples of Eastern Europe as a place of worship, trade and diplomacy. The word itself has its roots in the name of a pagan god Khors to whom sacrifices were made as late as the middle of the 10th century according to Byzantine Emperor Constantine VII [Olga Apanovich: Khortitsya (Mistetvo Publishers, Kyiv, 1968), p. 1]. These sacrifices were made on the island of Khortitza where an altar to Khors, a sun god, had been built by the ancients and honoured until Ukraine was officially Christianized in 988 A.D. The Khortytsa region was an estate acquired by Grigory Potemkin after the defeat of the Cossacks in 1775. In 1789 Potemkin adroitly exchanged his own Khotytsa estate for the more promising government land the Mennonite delegates had chosen farther south near Berislav.

One of the early Khortytsa villages took the ancient name for itself, and that was repeated in Manitoba where one of the first villages established on the Mennonite East Reserve in 1874 was Chortitz. One of the mythic features of the original Chortitz village in Ukraine was the existence of a huge oak, already many hundreds of years old when the Mennonites arrived. Today an acorn from that tree has grown into a large specimen in Winnipeg, and an acorn from that tree has grown into a small oak tree on the site of this early church in the centre of Chortitz in Manitoba as well.

The Mennonite village of Chortitz in Manitoba served as a meeting place for early settlers from the Bergthal and Chortitz Colonies in Ukraine. The first and most influential church building on the East Reserve was built in this village in about 1877 since this is where the religious leader, Elder Gerhard Wiebe, lived and the name carried over into the official name of one denomination of Mennonites, the Chortitzer Mennonite Church, which is today the Christian Mennonite Conference. The name Chortitz continued to be used wherever Russian Mennonites settled, so that today there is also a Chortitz in the WR, in Saskatchewan, in Mexico, in Paraguay, and several in various parts of Russia. 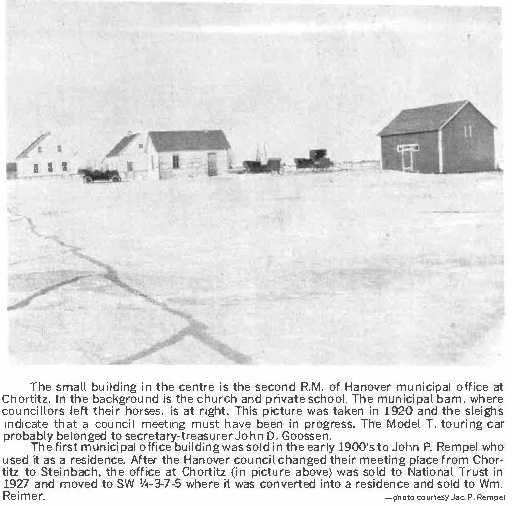 The church building seen here today was built in 1896-97 on the same site as the original one, and commissioned in fall of 1897. The architect was Gerhard Schroeder (1848-1910). His unique rafter design allowed for a wide suspended ceiling without the massive pillars normally found in the aisles of old Mennonite churches. The building was in continuous use by the denomination until 2010 when a huge homecoming was held on August 29, during which the building was decommissioned by the Chortitzer Conference. The church building was then offered to the Mennonite Heritage Village Museum but since the Museum already had two churches, there was little incentive to add another. Consequently the site was put up for sale but a group of interested individuals appealed to Conference to transfer the title to the Rural Municipality of Hanover for a provisional 5-year period during which a long-range plan for its preservation as a heritage site could be undertaken, and repairs be made. A plan to involve the Conference, the Mennonite Heritage Village and the RM of Hanover was developed, with the idea that the site has significance to all three organizations. In the meantime, an organizational meeting was convened in January of 2012 to formalize the support group as the Chortitz Church Heritage Committee [later Chortitz Heritage Church Committee]. Ownership was transferred to the RM of Hanover in June 2013. The RM of Hanover designated the site as a Municipal Heritage Site in 2014, and in 2018 at the end of the 5-year period a Memorandum of Understanding reached with the RM of Hanover which saw the title remain with the Municipality, but stipulating that the agreement be reviewed every five years, and the regular affairs of the site be in the care of the CHC Committee.

Originally the village street ran to the north of the building, since there was no surveyed government road, and therefore the cemetery was just to the south of the building. Today the section road runs between the church and the cemetery, which is still active. A close look at the neighbouring yards will reveal a slight hump where the village street used to be. The church sanctuary itself was turned 90 degrees, so that the pulpit and podium for the ministers and song leaders was along the side wall, with separate entrances for the men and women, who also sat in separate sections in the sanctuary. 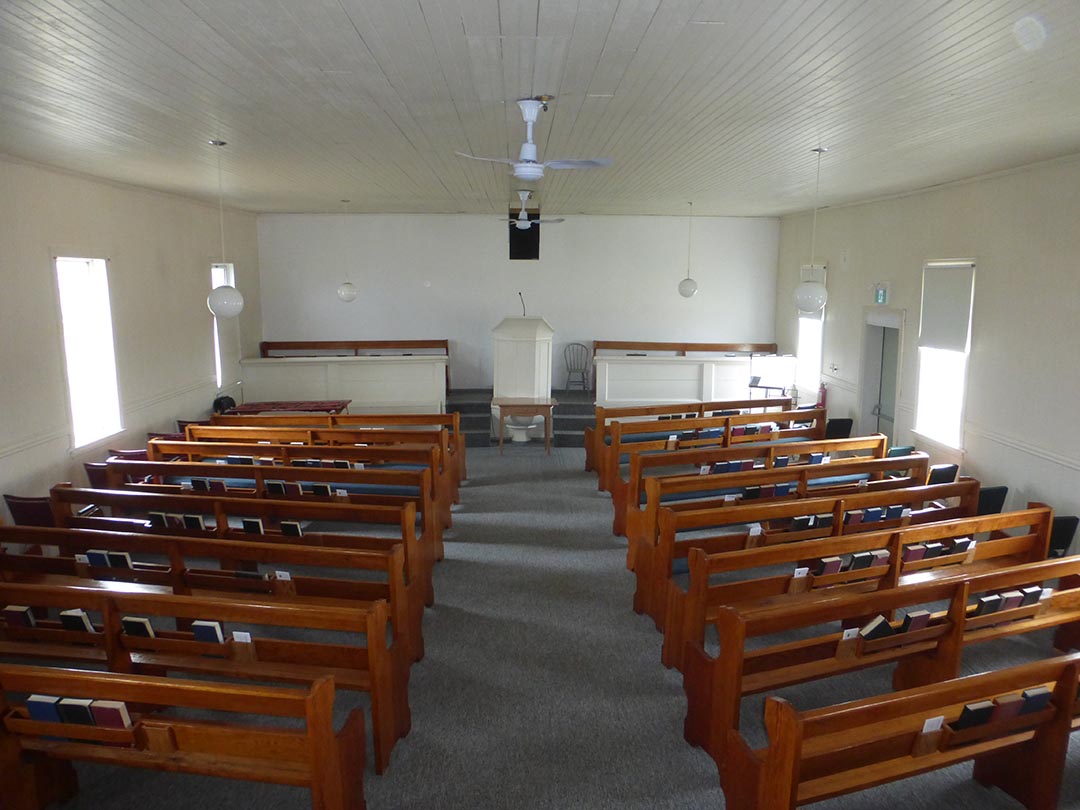 Events are held two or three times a year, featuring acapella singing in German, and the building is available for weddings, funerals, special prayer vigils, or other more regular rentals.

Fires may start easily and spread quickly but there will be minimal involvement of deeper fuel layers or larger fuels.